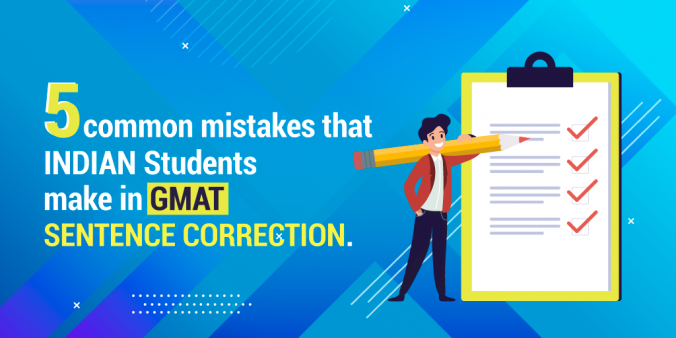 Sentence Correction (SC) questions are a crucial part of the Verbal Reasoning Section of the GMAT, accounting for about 35 to 40 per cent of the entire section.

And considering that English is not the primary language of communication for Indian students, the Verbal Reasoning section is always challenging for them. While many students get lost in studying arcane and complex grammar rules for Sentence Correction, it is important to realize that SC is not just about mugging up grammar. There is so much more to it!

GMAT’s official website states that the Sentence Correction tests test takers on two aspects of their English language proficiency: correct expression and effective expression. While the former is a test of grammar and sentence structures, the latter is a test of conciseness, clarity, and cogency in sentences.

Despite Sentence Correction being so logic- and strategy-based, many Indian students tend to make some mistakes when working on these questions.

In this blog, we will discuss a few common mistakes that Indian students make on the GMAT. And, wouldn’t it be great that you can learn from these mistakes rather than make them yourself and repent later! Read on and understand how to correct the commonly-made mistakes on the GMAT SC.

1.     Picking up an answer option that “sounds right”
2.     Not using elimination
3.     Not focusing on the overall meaning of the sentence
4.     Rushing through the questions
5.     Not using reliable sources to practice

Picking up an answer option that “sounds right”

This is, perhaps, the biggest mistake that Indian students make when solving the GMAT Sentence Correction – they pick up that answer option that ‘sounds right.’ Now, because English is not the native language of Indian students, their judgement of how right a sentence ‘sounds’ might be different from what is grammatically and logically correct.

Also, the higher the level of GMAT questions, the more hazy and ambiguous the options will look; there would also be very little differences between them. In such cases, relying on your sense of hearing might not be the best option.

Be thorough with the basic grammar rules – parallel structure, subject-verb agreement, modifiers, tenses, prepositions, and redundancy are a few of the often tested rules. A good command on such rules will help you spot the right answers quicker.

The single most important rule to solving all questions on the Verbal Reasoning section of the GMAT is elimination. Think of it in this way – if you are looking for the right answer, you must ensure that all words in the right answer are right. Isn’t that going to be super tough?

On the other hand, if you are eliminating, then just one single wrong word is enough to cancel the option. Isn’t this much easier? Also, because you have less than 2 minutes to answer each question, elimination is the most feasible approach – you might not have the time to look through each option meticulously.

Finally, when you have reached the right answer by using elimination, there is very little scope for the answer to be incorrect! Isn’t it?

How many sentence correction questions are on the GMAT?

Not focusing on the overall meaning of the sentence

Often, the errors in a Sentence Correction question do not lie in obscure grammar rules or unfamiliar idiomatic constructions. Errors, many times, are related to the meaning of the sentence.

But, Indian students tend to ignore the overall meaning of the sentence, worrying about the grammar rather than the content.

The GMAT is an exam for admission into MBA schools; it is not a test that would help you do a PhD in grammar! So, it is only obvious that it would not test you irrelevant and obscure grammar rules and ideas. It tests you on the skills that management graduates must have such as communicating effectively and concisely and making the best judgement in a limited amount of time.

When solving Sentence Correction questions, you must look at the bigger picture. When picking up the right answer, check whether the intended meaning of the sentence is conveyed.

Also, look closely at the non-underlined portion for clues – they might help you considerably in picking the right answer.

Rushing through the questions

Often, in the greed to finish the exam on time, a lot of students tend to rush through Sentence Completion questions. In the process, they miss out on important clues or crucial differences between the answer options. Rather than helping the cause, this approach makes you linger on a question for a long time, creating more panic and anxiety about time running out. This would obviously result in an increased likelihood of you getting the question wrong.

When practicing, train yourself to read the answer options thoroughly. Also, work on enough mock tests so that you learn the art of time management.

Not using reliable sources to practice

The internet is a double edged sword when it comes to preparing for the GMAT. While it can help you access questions, work on mock tests, and read up posts about GMAT experts from all over the world, it also has tons of information from unreliable and dubious sources. And, it is easy to get lost in the myriad of data and information present online.

Often, Indian students make the mistake of practicing from unreliable and untrustworthy sources. The questions from such sites might not replicate the questions in the actual exam. Not only does this waste much precious preparation time, it also does not help you to learn the right concepts and strategies.

Use authentic and reliable material only for practicing and evaluating your performance. Here are a few sources you can use:

If you have any questions about how to prepare for the GMAT, get in touch with our exam specialists for a 15-minute free counseling session. We would be more than happy to help you ace your preparation and get an admit into your dream college!

These 5 tips for GRE Argument task will never make you go wrong!