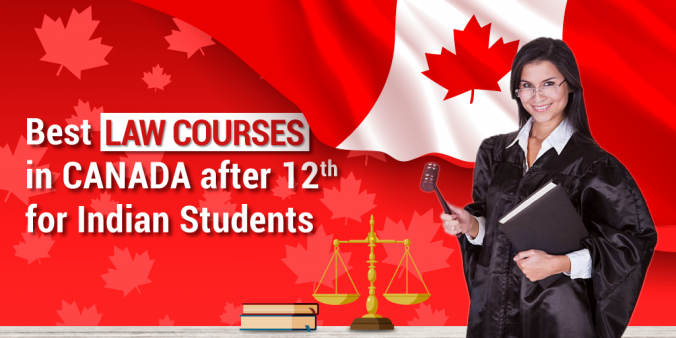 Are you bummed with the fact that most law courses in Canada for Indian students require an IELTS/TOEFL score? Well, the silver lining here is that at least you don’t have to sit for CLAT which FYI, is definitely trickier than IELTS or any other ELP test.

With that out of the way let’s dive into the top law courses in Canada after 12th, their admission requirements, and more!

Yes, it is possible and many universities offer several law courses in Canada for Indian students. If you want to study law in Canada after 12th you are generally required to have an English language proficiency test score and high school certification with upper second class or 60-69% score. Although some law schools in Canada are LSAC members which implies that you will need an LSAT (Law School Admissions Test) score for admission into their law program.

However, eligibility for law courses in Canada for Indian students that do not require LSAT generally includes an aggregate band score of 6 on IELTS or 213 on TOEFL and at least 60% or higher in 12th scorecard. Since eligibility differs from law school to law school, it is always advised to check the requirements for your preferred university and program.

What are the law courses in Canada after 12th for Indian Students?

As you may expect there are several law courses in Canada after 12th such as Bachelors in Legal Studies, BA in Law & Society, Bachelor of Arts (Criminal Justice), and BA Hons in Criminology to name a few.

Given below are some of the most popular law courses in Canada after 12th offered by top-ranking universities along with their eligibility criteria: (you’re welcome)

Have you taken the IELTS before?

Canada is home to many top-ranking universities and it’s not a secret, but also it is home to some of the best law schools in the world. In this section, we will talk about the best law colleges in Canada that FYI, offer a whopping average annual salary of CAD 52,000 – CAD 2,00,000 to its law graduates (depending on the program). So let’s talk about these too-good-to-be-true law schools, shall we?

Given below is a list of best law colleges in Canada and their QS Universities Ranking for Law and Legal Studies:

Want help in IELTS test prep? You are just one call away. Connect with our counsellors for your personalised study plan or a free 15-minute session to get all your doubts resolved.

Planning to study Medicine in Germany? We’ve got you covered