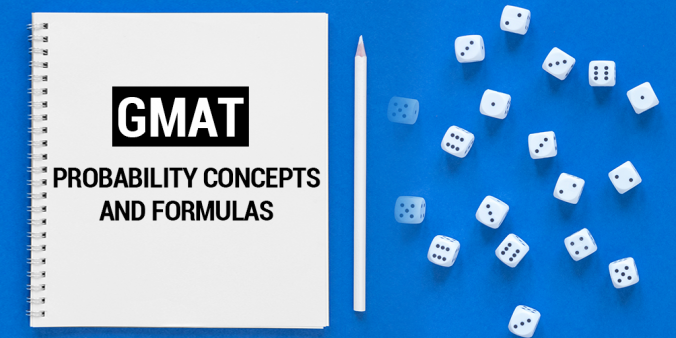 In general, the student can either define the event narrowly or broadly. Narrow definitions of events are the building blocks of any probability problem and whenever there is a doubt about a problem, you are advised to get into the narrowest form of the event definition. The difference between the narrow and broad definition of the event can be explained through an example:

The broad definition of the event here is getting a number greater than 2 and this probability is given by 4/6. However, this event can also be broken down into its more basic definitions as:

Although in this example it seems highly trivial, the narrow event-definition approach is very effective in solving difficult problems on probability.

In general, event definition means breaking up the event into the most basic building blocks, which have to be connected together through the two English conjunctions— ‘AND’ and ‘OR’.

GMAT Probability Concepts: The Use of the Conjunction ‘AND’

GMAT Probability Concepts: The Use of the Conjunction ‘OR’

Whenever we use OR as the natural conjunction joining two separate parts of the event definition, we replace the OR with the addition sign.

Thus, if A OR B has to occur, and if the probability of their occurrence is P(A) and P(B) respectively, then the probability that A OR B occurs is got by connecting P(A) OR P(B). Replacing the OR by addition sign, we get the required probability as P(A) + P(B).

Event Definition: A wins OR B wins.

How can I improve GMAT Quant speed?

GMAT Probability Concepts: Combination of ‘AND’ and ‘OR’

If two dice are thrown, what is the chance that the sum of the numbers is not less than 10?

The bottom line is that no matter how complicated the problem on probability is, it can be broken up into its narrower parts, which can be connected by ANDs and ORs to get the event definition.

Once the event is defined, the probability of each narrow event within the broad event is calculated and all the narrow events are connected by Multiplication (for OR) to get the final solution.

After a little bit of practice you can also think about this directly as:

Have questions about GMAT Quant preparation or admissions? We can help! Connect with our counsellors for a free 15-minute consultation session and get all your doubts resolved!

IIT vs MIT (How difficult is MIT in comparison to IIT?)