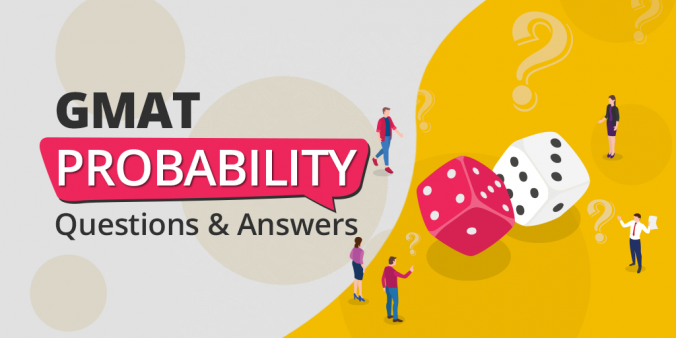 Are you desperately looking for practice questions on the GMAT club forum? How many questions did you find for the topic you were looking for? Are they any good?

Well, if you are scavenging for good practice questions you’ve just hit a gold mine! Problem solving comprises roughly 50% of the total questions in the GMAT quant section and in this blog, we will show you how to solve GMAT probability questions through some quality practice questions and their detailed explanations. Let’s go!

A person has 3 children with at least one boy. Find the probability of having at least 2 boys among the children.

Solution The event is occurring under the following situations:

Out of 13 applicants for a job, there are 5 women and 8 men. Two persons are to be selected for the job. The probability that at least one of the selected persons will be a woman is:

Solution: The required probability will be given by

First is a woman and Second is a man OR

First is a man and Second is a woman OR

Alternatively, we can define the non-event as: There are two men and no women. Then, the probability of the non­event is

[Note: This is a case of probability calculation where rep­etition is not allowed.]

Solution The event is defined as:

Six positive numbers are taken at random and are multiplied together. Then what is the probability that the product ends in an odd digit other than 5?

Solution The event will occur when all the numbers selected are ending in 1, 3, 7, or 9.

If we take numbers between 1 to 10 (both inclusive), we will have a positive occurrence if each of the six numbers selected is either 1, 3, 7, or 9.

Have questions about how to prepare for GMAT Quant?

Solution The non-event is defined as:

A carton contains 25 bulbs, 8 of which are defective. What is the probability that if a sample of 4 bulbs is chosen, exactly 2 of them will be defective?

Out of 40 consecutive integers, two are chosen at random. Find the probability that their sum is odd.

Mathematically, the probability will be given by:

An integer is chosen at random from the first 100 integers. What is the probability that this number will not be divisible by 5 or 8?

Have questions about how to prepare for GMAT Quant? We can help! Schedule a free 15-minute one-on-one session with our top experts to get all your doubts resolved.