IELTS vs TOEFL: What is the Difference? 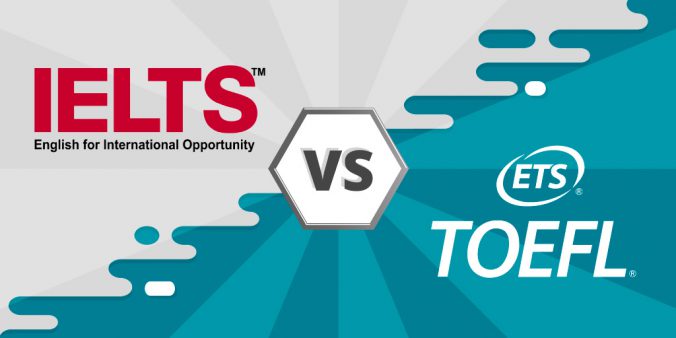 If you are not a native English speaker, you will almost always be required to take an English language proficiency test as part of your application to study at an English-speaking university in another country. The International English Language Test System (IELTS) and the Test of English as a Foreign Language (TOEFL) are the two most widely accepted English language tests in the world.

While both accurately test your level of English and are widely accepted by thousands of institutions worldwide, the two tests differ in their approach, structure, and teaching criteria, so you should choose carefully. While deciding which test to take, students frequently have doubts in their minds like do universities prefer a specific test? Which is preferable, TOEFL or IELTS? Or something as basic as which one is easier? Before you get into the process of making these critical decisions for yourself, let’s go over the basics of both tests, shall we?

1. Structural Difference Between IELTS and TOEFL
2. Which is more widely accepted, TOEFL or IELTS?
3. List of TOEFL-accepted countries
4. List of countries that recognise IELTS
5. IELTS vs. TOEFL. Which is easier?

The IELTS is an English language test that is recognised by over 11,000 institutions in 140 countries worldwide for educational, immigration, and employment purposes. IELTS is an international language test that is jointly owned by the British Council, IDP: IELTS Australia, and Cambridge Assessment English. You can use either UK or US spelling for this test. Depending on your study program’s entry requirements, you may be required to take either the Academic or General Training IELTS exam. IELTS assesses English proficiency in four different areas: reading, listening, writing, and speaking. The three sections of the IELTS test – Reading, Listening, and Writing – can be completed in a single 150-minute session without a break. The speaking exam can be scheduled up to a week before or after the three sectional exams.

The TOEFL exam is designed to assess your ability to communicate in English in academic, university, and classroom settings. It is recognised by over 11,500 institutions in 160 countries, including the United Kingdom, the United States, and Australia, as well as all the world’s top 100 universities. TOEFL is administered by the Education Testing Service (ETS), a US-based organisation, and is thus administered in American English. American institutions are more likely to favour this test. The TOEFL exam is also divided into four sections: Reading, Listening, Speaking, and Writing. TOEFL tests are available in two formats: online and paper-based. It is used for both academic and non-academic English testing. This test assesses students’ English communication skills, and the results are valid for two years.

Structural Difference Between IELTS and TOEFL

Which is more widely accepted, TOEFL or IELTS?

The TOEFL score is accepted in almost every English-speaking country. TOEFL scores are accepted by over 160 countries and 11,500 universities worldwide. Many international organisations are in the same boat. The following are some of the major countries that accept the TOEFL score:

IELTS is accepted by almost 11,000 universities, organisations, and colleges in 140 countries. However, most students select IELTS to study, work, and immigrate to nations such as the United Kingdom, Ireland, Australia, Canada, and the United States. IELTS is accepted in the following countries:

IELTS vs. TOEFL. Which is easier?

Both will assess you on four major language skills: listening, speaking, reading, and writing. These tests are standardised, which simply means that the results are consistent around the world.

The TOEFL exam consists of 6 questions that must be answered in approximately 20 minutes. The questions will be drawn from familiar topics, and you will respond to a computer through microphone. Because the IELTS speaking test is administered by a live person, it naturally feels like a normal discussion, and students perform exceptionally well on it.

So, now that you have a thorough understanding of the fundamentals and intricacies of both globally accepted tests, use the information to make the correct choice for yourself.

Have questions about TOEFL or IELTS preparation or admissions? We can help! Connect with our counselors for a free 15-minute consultation session to get all your questions resolved.

7 things to consider when choosing a college in the USA