Planning to study Medicine in Germany? We’ve got you covered 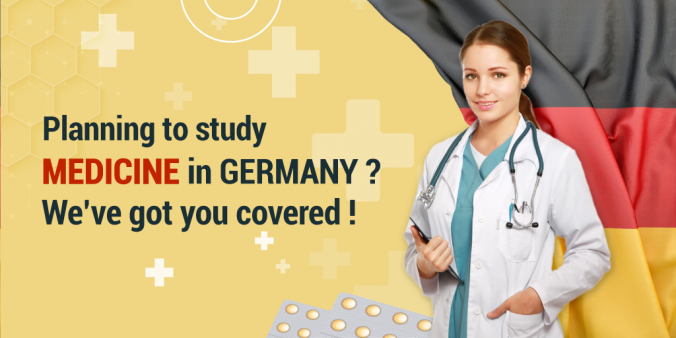 Germany is one of the most-favoured destinations for Indian students to study medicine. This is because it offers quality education at low-cost along with a reasonable cost of living. For Indian students who wish to make a career in medicine, Germany is a great choice for their medical education for a number of reasons. Let us take a look at them.

A quick recap of medical studies in India-

After finishing their MBBS degree, students in India can start practising as licensed physicians or continue with their post-graduate training by pursuing an MD degree. This allows for specialisation in certain medical fields. The duration of an MD degree is 3 years and is finished off with a practical and theoretical examination.

Why medicine in Germany?

Germany offers high-quality education at its medical universities along with perfect exposure. A considerable number of medical universities in Germany do not charge tuition fees from international students as well, bringing down the cost of studying medicine in Germany. Medical Universities in Germany are among the best in the world and recognised by some of the world’s major organizations such as WHO and MCI (Medical Council of India). A medical degree from Germany is recognised almost all over the world.

Structure of medical studies in Germany

Germany does not offer MBBS in a regular degree format. Instead, medicine in Germany is offered as a regular structured degree course. This course includes equivalents of both undergraduate and graduate studies. The duration of the course is six years and three months. At the end of this medical degree course, the students have to clear a state exam (Staatesexamen), after which they get a license to practice as a physician (approbation) in Germany. Additionally, after clearing the state exam, you can start your residency in Germany.

The six-year medical course is divided as follows:

The curriculum of medical studies in Germany is strictly regulated under federal regulations on medical registration. A similar course structure and similar steps of training are followed to study medicine in Germany, irrespective of the university you choose.

Other ways to study medicine in Germany

Germany has a great demand for not only doctors but also for other medical professionals and experts. If you do not wish to pursue MBBS in Germany, you can look for other study programs in medical sciences. These programs are offered in master’s and bachelor’s formats with options to study in German or English language. They train you to research in various health-related topics, though a degree in any of these does not lead to an approbation to work as a medical physician in Germany. Moreover, if you are aiming at conducting research and an academic doctorate title, many international graduate schools offer that too.

How do I become a medical student in Germany?

Requirements of studying medicine in Germany

Medicine in Germany is taught solely in the German language. At the time of application, it is recommended that you have excellent German language skills (often C1-level). But don’t worry, universities do not expect you to have the fluency level of a native. With more than 2,45,000 international students in Germany right now, German universities are prepared to have second-language speakers in their classrooms.

Some health sciences programs are taught in both English and German. Proficiency in German will also assist as you move ahead in your career as a medical professional. Moreover, if you wish to study medicine in Germany after completing your MBBS in India, you need to have only B2 level of German language proficiency.

The application process for applying to medical universities in Germany varies across universities and can be complicated and time-consuming. To make sure you tick all the requirements off the list, get in touch with our counsellor.

Admission Deadlines for Medicine in Germany

The admission intakes for medical universities in Germany vary from university to university. Generally, most medical schools in Germany admit students in two intakes:

You should keep a tab on the university website for admission-related information and begin your application as soon as possible.

Cost of studying medicine in Germany

Since most of the German universities charge no to low tuition fees, the overall cost of pursuing an MBBS degree in Germany is primarily determined by the cost of living in Germany. As an international student, your cost of living in Germany could come to around 400€ per month. Indian students in Germany can also avail themselves of cheap on-campus accommodation and free travelling services. Additionally, the cost of the German language course could vary between 4000€ – 5000€. But for the good part, you can sponsor your medical studies in Germany by working. Germany allows students to work a part-time job for a maximum of 20 hours per week. This helps you manage your living costs and finance your medical studies in Germany.

Job prospects and PR after medicine in Germany

After completing their Medical PG in Germany, it is easier for Indian students to get a work permit as compared to other countries. They can earn around 30,000€ remuneration during their medical PG studies in Germany. They can stay for up to 18 months after the completion of their degree, and can easily get a job paying almost 50,000€ per annum. After they have worked for at least 3 years in Germany, Indian students are eligible for Permanent Residency. After 8 years of living and working in Germany, you are also eligible for a German passport, which is one of the strongest passports in the world and comes with its own advantages.

For more information on PR in Germany and German passports, you can get in touch with our consultants at Jamboree.

Top Universities for Medicine in Germany

There are more than 35 medical universities in Germany that offer degrees in medicine. The global recognition of these universities by organizations such as MCI, UNO, WHO and many others gives Indian students pursuing medicine in Germany an increased flexibility in finding job opportunities in various other countries as well.

Some of the top medical universities in Germany are:

For more information on how to pursue medicine in Germany, you could reach out to our consultant. You can also visit our nearest centre or call us.