These 5 tips for GRE Argument task will never make you go wrong! 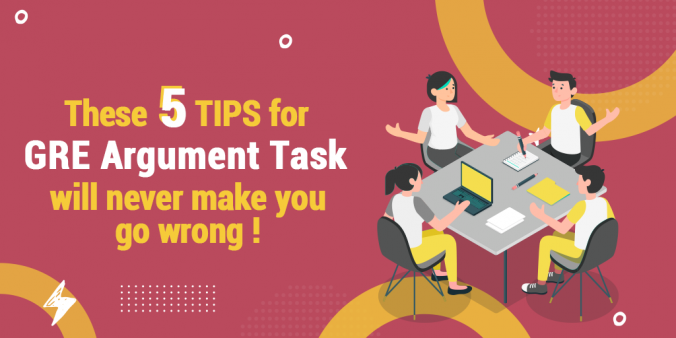 The AWA Argument task is super-interesting and easy, provided you know how to tackle it. In a typical GRE Argument task, you are provided with a logical story, also called an argument, that contains a combination of facts and opinions. In the story, the author would often recommend a particular course of action or make certain conclusions. You are required to evaluate the logical soundness and coherence of the argument.

The Official Guide to the GRE by ETS states that the Argument task “assesses your ability to understand, analyze, and evaluate arguments according to specific instructions and to clearly convey your evaluation in writing.”

In this blog, we discuss 5 tips that will help you ace the AWA Argument task.

1.     Read the question and instructions thoroughly and answer accordingly
2.     Identify and differentiate between the facts and opinions
3.     Evaluate the argument and identify the gaps in logic
4.     List the alternate explanations that the author has failed to consider
5.     Structure the essay well
6.     Reread the essay before submitting it

Read the question and instructions thoroughly and answer accordingly

The first step to do well on the AWA Argument task is to read the given argument thoroughly. You must look carefully at the transition words to identify the major changes in ideas occurring in the argument.

While it is obvious that you must read the argument carefully, it is also crucial that you thoroughly read the instructions that follow. The instructions could vary significantly and it is imperative that you answer in response to the questions asked.

Do you realise how varied and different these instructions are? Ensure that you craft your response accordingly.

Unfortunately, many students merely evaluate the argument and list the flaws, irrespective of the instructions. This might result in a low score because it demonstrates that you have not understood the requirements of the task.

Identify and differentiate between the facts and opinions

The pertinent question here is how do you understand the difference between facts and opinions. A thumb rule is that facts are any bits of information that are verifiable. So, any data, statistics, or numbers are all facts.

Opinions are just that – opinions. They cannot be checked for their correctness. And how do you identify them? For starters, you can also look out for strong words such as ‘clearly,’ ‘obviously,’ ‘certainly,’ ‘definitely,’ which generally are used to state opinions.

GRE argument essay – How to get a perfect 6 Score?


Have you taken the GRE before?

Evaluate the argument and identify the gaps in logic

To do so effectively, you must ask yourself these questions:

List the alternate explanations that the author has failed to consider

How do you really demonstrate that you have evaluated the argument and have understood the flaws in logic of the argument? By stating all the information that the author has overlooked or assumed and by listing all the evidence that would invalidate the argument.

So, if you are able to list those glaring fallacies in the argument, give reasons for why those ideas are flawed, and provide compelling and thorough alternate explanations to support your perspective, you are on the right track!

The AWA section tests you on three parameters – quality of points, structure of the essay, and command over language. So, ensure that you structure the essay appropriately.

Your essay must have three parts – an introduction, the body paragraphs, and a conclusion. The introduction can be a simple 4 to 5 sentence paragraph that demonstrates your understanding of the given argument. It should also convey that the argument, in its current form, is weak.

The body of the essay is the soul of the essay, isn’t it? You can have anywhere from 2 to 4 body paragraphs. These must elucidate effectively the flaws of the argument and the counterexamples.

The conclusion, like the introduction, must be a small paragraph that summarizes the essay.

P.S: Use transition words and phrases to show transitions in ideas and paragraphs. Also, it is recommended that you use third person to build the argument. So, feel free to use “the author” or “the argument.”

Reread the essay before submitting it

I cannot emphasize the importance of this point enough. Often, when you reread your essay, you’d realize how many errors you have made unwittingly. And really, these avoidable errors are best avoided!

So, you must allot the last 5 minutes to just reread the essay and correct those little typos or grammatical errors. You might also want to, perhaps, replace a common word with a better word to show your command over the language.

Now that you are aware of all the do’s in an argument task, let’s have a look at this interesting argument and discuss the possible flaws.

The following appeared in an article written by Dr. Karp, an anthropologist.

“Twenty years ago, Dr. Field, a noted anthropologist, visited the island of Tertia and concluded from his observations that children in Tertia were reared by an entire village rather than by their own biological parents. However, my recent interviews with children living in the group of islands that includes Tertia show that these children spend much more time talking about their biological parents than about other adults in the village. This research of mine proves that Dr. Field’s conclusion about Tertian village culture is invalid and thus that the observation-centered approach to studying cultures is invalid as well. The interview-centered method that my team of graduate students is currently using in Tertia will establish a much more accurate understanding of child-rearing traditions there and in other island cultures.”

Write a response in which you discuss what specific evidence is needed to evaluate the argument and explain how the evidence would weaken or strengthen the argument.

The first step here is to clearly understand the facts and the opinions. Dr. Karp concludes that Dr. Field’s conclusions about Tertian village culture is invalid and that his own interview-centered method will establish a more accurate understanding of child-rearing traditions.

However, there are quite a few pieces of evidence that are needed before one can believe that Dr. Karp’s conclusion is correct.

Firstly, the two studies have been conducted in very different times. While Dr. Karp’s study is “recent,” Dr. Field’s observations were done “twenty years ago.” Now, don’t you think something could have changed during this time? More evidence on the changes that have taken place in Tertia is needed before we can conclude which of the two studies is more reliable.

Secondly, the only reason that Dr. Karp has given to validate his interview-centred approach is that the children “spend much more time talking about their biological parents than about other adults in the village.” Now, is this reason enough to conclude that Dr. Field’s study is incorrect? What if the questions asked in the interview were related to biological parents? What if the children did not understand the questions well? What was the nature of the questions asked? Without more evidence to answer these questions, it might not be right to conclude that the interview-centred approach is correct.

When you look closely, you’d also realize that the subjects of the study belong to different locations. While Dr. Field’s study pertains to children in Tertia, Dr. Karp’s study has been conducted on children living in the group of islands that contains Tertia. However, how many children from Tertia were included in the study? If the number was not substantial, the inconsistency in the results of the two studies is obvious.

Finally, Dr. Karp’s conclusion seems implausible. Don’t you think that he has made a generalization? He has extrapolated the results of just one study to an entire group, concluding that the “observation-centered approach to studying cultures is invalid.” Just based on this specific scenario, Dr Karp has invalidated the observation-centred approach to studying all cultures, drawing a conclusion from very limited evidence. For exactly these reasons, it might not be fair to believe that the interview-centred approach is more accurate.

How to write a great GRE argument essay?

The following recommendation appeared in a memo from the mayor of the town of Hopewell.

Perhaps the biggest assumption that the mayor of Hopewell has made is believing that the towns of Ocean View and Hopewell are similar. And by similar, I mean that the two have similar demographics, geographies, conditions, and inhabitants. Isn’t this why he believes that a solution that has worked for Ocean View will work for Hopewell. However, we are really unsure whether opening a golf course and resort hotel will have a similar impact in Hopewell. For instance, will the inhabitants of Hopewell even enjoy a golf course and a hotel resort?

Secondly, the mayor has assumed that the only reason for the increase in tourism and business in Hopewell is due to the golf course and resort. But, he has overlooked the possibility that there could have been a host of other reasons that might have caused this boom in tourism, economy, and tax revenue. If the government of Ocean View had, during the same time, worked on campaigns to attract tourists or implemented easier policies to help entrepreneurs set up businesses, then the mayor’s assumption stands invalidated. Similarly, what if Ocean View was already on the path to a robust economy, and the opening of the golf course and hotel resort was just a coincidence?

Due to all these erroneous assumptions, the conclusion of the mayor seems implausible. Building a golf course and resort hotel might really not help in improving the economy of Hopewell.

If you have any further questions regarding the approach to solve the GRE Argument task, feel free to get in touch with our exam specialists. Schedule a 15-minute FREE counseling session and get to know how to ace the GMAT in just two months!

Top 25 Universities Offering Masters of Engineering Management in the USA