These 7 tips for GRE Issue task will never make you go wrong! 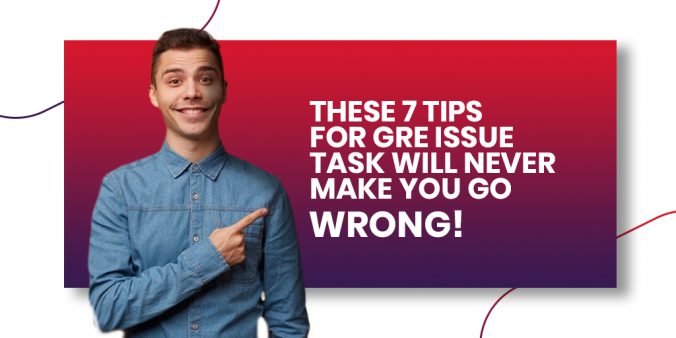 The Official Guide of the GRE states that the AWA Issue Task “assesses your ability to think critically about a topic of general interest according to specific instructions and to clearly express your thoughts about it in writing.”

So what really happens on a GRE AWA Issue task?

As part of the issue task, you are provided with a statement, which is a claim or an opinion that can be discussed from multiple points of view and applied to a wide range of situations. This claim is followed by a set of instructions. You are required to take a position on the given issue statement in accordance with the stated instructions and provide a compelling case for your position.

While the task itself seems simple, a lot of students falter in writing an effective Issue essay. So, in this article we discuss 7 simple yet effective tips that will help you never go wrong on this task.

Do take a position

By means of the GRE Issue task, the evaluators are analyzing your critical reasoning skills and your ability to provide a compelling case for your beliefs. So, ensure that you take a position on the given claim and not take the middle-of-the-road approach. It is imaginable that you would not agree or disagree completely with the given claim – a qualified agreement or disagreement is also a stance. However, be sure to take a stance.

Also, because there is no “correct” side, it really doesn’t matter which side you take as long as you are able to support it in a compelling manner.

But how do you take a position? Of course, you’d have to spend a few minutes brainstorming and jotting down strong reasons and effective examples.

In doing so, you must try to find answers to these questions:

Once you have the answers to these questions, you would know which position to take and how to support it.

Read the given instructions thoroughly

The instructions on an AWA Issue task can vary considerably and can ask for different things. It is imperative that you form your response in accordance with these instructions.

Here are a few examples of the instructions. Read them carefully and understand their requirements.

While the instructions start in a similar manner, they have some differences in the latter half. The first set of instructions asks you to discuss circumstances in which the given recommendation might or might not be helpful. The second asks you to consider ways in which the given claim might or might not be true while the third explicitly asks you to address the most compelling reasons or examples that can be used to challenge your position. The fourth simply asks you to discuss the degree to which you agree or disagree with the claim and the reason for it.

Discuss the other perspective too

The issue task is a highly opinionated one, don’t you think? The given prompt itself is an opinion and you are required to discuss your opinions on it. Now you would agree with that opinions are never right or wrong; they are just that – opinions. So, you would also agree that however strongly you believe in your stance, there will be an equally strong other position that is contrary to yours.

Remember that there are no absolutes in the world – no complete blacks or whites. There are only greys. For exactly this reason, it would be great if, in your essay, you could also briefly discuss the stance opposing yours. Wouldn’t you come across as a mature and level-headed person if you consider and respect others’ perspectives despite your beliefs? So, go ahead and briefly acknowledge the other side – it will give a more holistic view to your essay!

Have you taken the GRE before?

Do not digress from the main topic

To do well on the AWA Issue task, you must ensure that you do not stray away from the central idea of the issue.

Let me give you an example. Have a look at this issue.

As people rely more and more on technology to solve problems, the ability of humans to think for themselves will surely deteriorate.

Now, when we read our students’ essays on this topic, we notice many of them discussing in detail how technology has helped humans lead a comfortable, convenient, and effective life. However, many fail to address one central idea of the issue – that technology has deteriorated the humans’ ability to think for themselves.

This error, perhaps, is a result of not reading the given issue carefully and jumping into writing the essay. Don’t make this mistake. Spend the first couple of minutes to read the given topic carefully, understand all its nuances, assumptions, implications, and consequences.

Give compelling reasons and examples

Answer this question. If you are discussing a certain topic with a friend or a colleague, how do you support your opinions? So, suppose you are arguing with your friend about how the government of every country should offer free elementary education to all its students, how would you support this view?

You would state compelling reasons and real-world examples to support your position, wouldn’t you? For instance, you might bring up examples of countries that have provided free education to its children and have experienced positive consequences such as a higher literacy, better economy, lesser population below the poverty line, improved mental and physical health, reduced crime rate, and a higher happiness index since the introduction of free education. You would give examples of countries that are doing well economically and socially due to providing free education. What other ideas would you put forth to reinforce your stand?

In contrast to the opinion among students that the issue task requires you to be spontaneous, this task can be aced with a little bit of preparation. And how do you prepare better?

First, meticulously run through the pool of topics from the ETS website. This will give you a fair idea of the genres from which the task can be asked – education, law, humanities, society, leadership, and science and technology are a few spheres.

Once you have a fair idea of the topics, you might also want to create examples. Jamboree recommends that you use the SPLASH approach for creating effective examples. SPLASH is an acronym for:

So, read up about a few eminent personalities, anecdotes, incidents, and stories from these fields. For instance, in the literature bucket, you can use examples from classics, plays, or poetry. How impactful would your essay be when you write specific examples about Shakespearean plays such as Hamlet or Macbeth.

Similarly, in the history bucket, you can pick up examples from the World Wars, the Olympic Games, and some famous space missions to strengthen your stance.

You might want to read more about how to create examples from here: (Link to 6 step approach to answering any GRE AWA issue essay)

When typing the AWA Issue essay, you might have made a few typos, spelling mistakes, and grammatical errors unwittingly. And while you will not be marked down for each grammatical or spelling error, too many of such mistakes can cost you dearly.

So, it would be a great idea to allot the last five minutes of the 30-minute time limit to this step. Reread the essay before you submit it to avoid unintentional errors. You can also refine the essay by using better sentence structures and words.

Do bear in mind the above points and you are certain to ace the GRE Issue task. If you have any further questions, do not hesitate to contact our GRE experts. Just a 15 minute free online consultation session with them will give you a new perspective about GRE preparation and university admissions. Try it now!

Top 25 Universities Offering Masters of Engineering Management in the USA