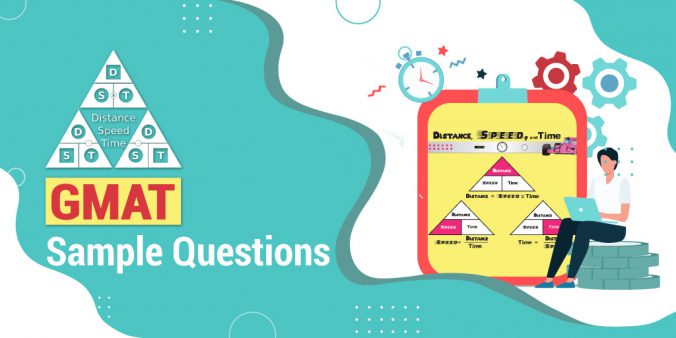 Are you desperately looking for practice questions on the GMAT club forum? How many questions did you find for the topic you were looking for? Are they any good?

Well, if you are scavenging for good practice questions you’ve just hit a gold mine! Problem solving comprises roughly 50% of the total questions in the GMAT quant section and in this blog, we are sharing some quality Speed Distance Time problems with answers. Let’s go!

Given below are some time speed distance GMAT questions of medium-level difficulty along with their answers.

1. Two trains are traveling in the opposite direction at uniform speeds of 60 and 50 km per hour respectively. They take 5 seconds to cross each other. If the two trains had travelled in the same direction, then a passenger sitting in the faster-moving train would have overtaken the other train in 18 seconds. What are the lengths of trains (in metres)?

Directions for Questions 2 to 5: Each of the following questions is followed by two statements. MARK,

(a) If the question can be answered with the help of statement I alone,

(b) If the question can be answered with the help of statement Il alone,

(c) If both, the statement I and statement Il are needed to answer the question, and

4. A train started from Station A, developed engine trouble, and reached Station B, 40 minutes late. What is the distance between Stations A and B?

5. What is the time difference between New York and London?

6. Every day Neera’s husband meets her at the city railway station at 6.00 p.m. and drives her to their residence. One day she left early from the office and reached the railway station at 5.00 p.m. She started walking towards her home, met her husband coming from their residence on the way and they reached home 10 minutes earlier than the usual time. For how long did she walk?

Directions for Questions 7 to 9: Use the following information:

Q started to move from point B towards point A exactly an hour after P started from A in the opposite direction. Q’s speed was twice that of P. When P had covered one-sixth of the distance between points A and B, Q had also covered the same distance.

7. The point where P and Q would meet is

8. How many hours would P take to reach B?

Have questions about GMAT Quant preparation or admissions?

9. How many more hours would P (compared to Q) take to complete his journey?

10. A ship leaves on a long voyage. When it is 18 miles from the shore, a seaplane, whose speed is ten times that of the ship, is sent to deliver mail. How far from the shore does the seaplane catch up with the ship?

12. A and B walk from X to Y, a distance of 27 km at 5 kmph and 7 kmph respectively. B reaches Y and immediately turns back meeting A at Z. What is the distance from X to Z?

13. The winning relay team in a high school sports competition clocked 48 minutes for a distance of 13.2 km. Its runners A, B, C, and D maintained speeds of 15 kmph, 16 kmph, 17 kmph, and 18 kmph respectively. What is the ratio of the time taken by B to than taken by D?

Direction for Question 14: The question is followed by two statements. As the answer,

Mark (a) if the question can be answered with the help of statement I alone,

Mark (b) if the question can be answered with the help of statement II, alone,

Mark (c) if both, statement and statement Il are needed to answer the question, and

Mark (d) if the question cannot be answered even with the help of both statements.

Given below are some time speed distance GMAT questions of a higher level of difficulty along with their answers.

15. Rahim plans to drive from city A to station C, at the speed of 70 km per hour, to catch a train arriving there from B. He must reach C at least 15 minutes before the arrival of the train. The train leaves B, located 500 km south of A, at 8:00 am and travels at a speed of 50 km per hour. It is known that C is located between the west and northwest of B, with BC at 60 degrees to AB. Also, C is located between south and southwest of A with AC at 30 degrees to AB. The latest time by which Rahim must leave A and still catch the train is closest to

17. Himanshu, Saral, and Vikas start running from the same point in the same direction along a straight line at 07:00 a.m., 08:00 a.m., and 10:00 a.m. with speeds of 2 kmph, 3 kmph and 4 kmph respectively. When Saral catches Himanshu he sends Himanshu back (along the straight line) immediately to deliver a message to Vikas. At what time would Himanshu meet Vikas?

18. P and Q are two points 100 km apart. A starts running from P towards Q at 10 km/hr. B starts running from Q at exactly the same time and in the same direction as that of A at 20 km/hr. After an hour, B turns back and changes his speed to 10 km/hr. After another hour, B again turns back and changes his speed to 20 km/hr. He keeps on changing his speed and direction in this manner till the time he meets A. After how much time will A and B meet for the first time?

20. Once upon a time, the king of a jungle planned a 2-kilometre race between a rabbit and a tortoise. Soon after the start of the race, the rabbit took a huge lead. On realizing that even after taking a nap of ‘t’ min, he would beat the tortoise by 13 min, he stooped under a tree and went to sleep. Meanwhile, the tortoise kept walking. When the rabbit woke up, he realized that he had slept for (14 + t) min, and immediately started running towards the target at a speed 3/2 times his original speed. The race eventually ended in a dead heat. If the ratio of the original speed of the rabbit to that of the tortoise was 6:1 and the rabbit overstretched his nap by 7/6 t min, then how long did the tortoise take to complete the race?

21. P, Q, and R start walking from the same point. P and Q start at 1 PM and R starts at 3 PM. R takes over P at 5 PM and then doubles his speed and takes over Q after another hour. What is the ratio of the speed of A and the speed of B?

Have questions about GMAT Quant preparation or admissions? We can help! Connect with our counsellors for a free 15-minute consultation session and get all your doubts resolved!

Most Popular Universities for MS Degree in the USA