Top 20 universities to study in the US 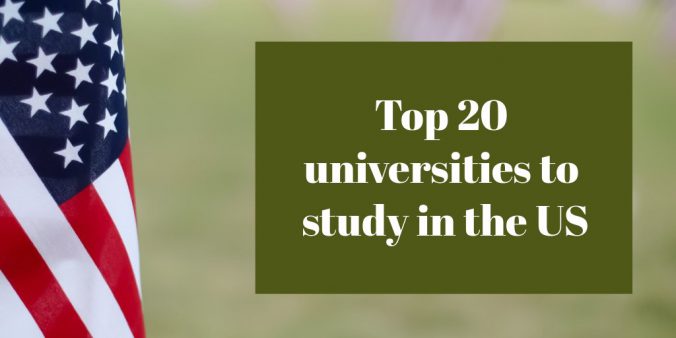 Known for its diverse culture, amazing universities and a plethora of opportunities, the United States of America is one of the most preferred destinations of Indian students. As recorded by National Center for Education Statistics (NCES), around 4,000 educational institutions across the nation currently welcome more than one million international students. According to QS World University Rankings, 2022, the USA encompasses 50 of the top 200 universities in the world.

Most of the good universities in the USA emphasize academic accomplishments and professional proficiencies. As an international student, you need to establish a GPA score of 3.0-4.0 on a 4.0 scale (83-100%) to get admission to tier 1 or tier 2 universities. The paperwork required for admission includes Statements of Purpose (SOPs), Letters of Recommendation (LORs), academic transcripts, financial proof, resume and standardized test scores to study in the USA. Regardless of changes in visa policies, mounting course fees, stricter visa interviews and more, Indian students still want to study in the USA.

With the highest number of universities maintaining their positions steadfastly in the top universities list of several reputed ranking bodies, the USA rightly has set yardsticks in education standards. We have complied a list of top 20 universities to study in the USA. Take a look!

Established in 1861, MIT has ever since played a significant role in the growth of modern technology and science, positioning itself among the most admired academic institutions in the world.

Stanford, founded in 1885, is a private research university in California. The campus size is 8,180 acres, and it is among the largest in the United States. Stanford is ranked among the best universities in the world by educational publications. The university has seven schools, i.e., three schools offering undergraduate programs and four professional schools that focus on graduate programs in medicine, law, business, and education.

It is a private, elite research university in Cambridge, Massachusetts. Established in 1636 as Harvard College, it is the oldest university for higher learning in the US, and among the most respected name in the world. Harvard has more pupils, faculty, and scholars who have won Nobel Prizes and Fields Medals than any other university in the world.

The University, established in 1891, is known for its forte in engineering and science and is one among a handful of institutes in the United States which is primarily focused on the instruction of pure and applied sciences.

5. The University of Chicago

Established in 1740, it has a campus size of 299 acres. It follows a semester-based academic calendar. UPenn has 12 schools, out of which five offer undergraduate and graduate programs, and the remaining seven offer only graduate programs.

Founded in 1701, it has a campus size of 373 acres. It follows a semester-based academic calendar. Yale is known for its excellent music and drama programs.

Founded in 1754, it has a campus size of 36 acres. It follows a semester-based academic calendar. Columbia has three undergraduate schools, as well as several graduate and professional schools.

It is one of the oldest colleges in America. It was established in 1746, and it has a campus size of 600 acres. Distinguished alumni include former President of the United States, Woodrow Wilson, and former first lady Michelle Obama.

Cornell University is an Ivy League that was founded in 1865. Located in Ithaca, New York, it has consistently been rated among the top universities in the world by major educational publications. Its notable alumni include a slew of CEOs, MDs and Founders of top Co’s like, Citigroup, Kraft foods, Tata Group, Autodesk, Verizon, MasterCard, Burger King, Johnson & Johnson and the like.

Considered to be the first research university of the country, JHU’s campuses are located in Maryland and Washington D.C. It was established in 1876 and it follows a semester-based academic calendar. The University is divided into nine schools, five of which serve undergraduate and graduate students. Courses to explore: biomedical engineering, public health, molecular biology, neuroscience, music and more.

Founded in 1851, its campus size is 231 acres. It follows a quarter-based academic calendar. It consists of 12 undergraduate and graduate schools and colleges. Best courses to explore in this highly prestigious varsity are: management, engineering and applied sciences, medicine, etc. Northwestern offers joint degree programs in engineering, medicine, science, mathematics and journalism.

It has a campus size of 419 acres and it follows a quarter-based academic calendar. Besides nationally-ranked undergraduate and graduate programs in psychology, fine arts, medicine, financial engineering, sociology, and other courses, UCLA also has a prestigious School of Theater, Film and Television. Its online graduate engineering program holds the top position in the country.

Established in 1838, it follows a semester-based academic calendar. Duke has a total of ten schools and colleges, most of which serve undergraduate and graduate programs. Courses to look out for: business, environment, engineering, law, medicine, statistics and more.

Brown offers several graduate studies through its Graduate School, which includes well-regarded programs in English and history. Established in 1764, it follows a semester-based academic calendar.

Berkeley has 14 schools and colleges, including several graduate and professional schools. It was established in 1868, the campus is spread across 1,232 acres. It follows a semester-based academic calendar. Courses worth exploring: mathematics, computer science, IT, business, genomics and more.

Rice consists of eight schools located in the heart of Houston’s Museum District. Founded in 1912, the university offers a vibrant student life, and it has a campus size of 300 acres. The university has close links to NASA. Courses to explore: engineering, music, architecture, space science, material science, nanotechnology, etc.

Notre Dame has eight schools and colleges, the biggest of which is the College of Arts and Letters. Notre Dame was established in 1842, and it has a campus size of 1,265 acres. Courses that you should explore: liberal arts, engineering, commerce, business, law and more.

Founded in 1880, it has a campus size that is spread across 226 acres. It has 24 schools and follows a semester-based academic calendar. Courses to explore: liberal arts, health sciences, cinematic arts, architecture, journalism and communication, etc.

These are the top 20 universities to study in the US, if you’re looking for a well-rounded education in a prestigious and highly-ranked institute. At Jamboree, we provide end-to-end admissions services, right from SAT prep to visa counseling, to ensure that you get into your dream college in the USA. Connect with us for a 15 minute free session and our counselors will answer your prep and admissions queries and chalk out your personalized admissions roadmap!

Unleash your MBBS dreams in the UK: universities, eligibility, fees, scholarships and more!