Top Public Universities in the USA 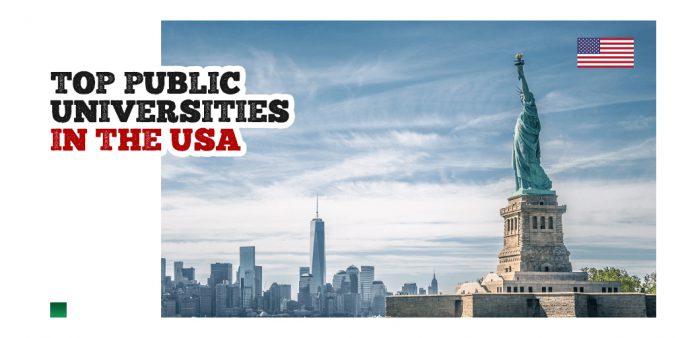 Public Universities offer the most outstanding education to a wide range of student at the most affordable prices. These universities operate under the supervision of state governments and are funded, in part, by tax dollars & subsidies.

Tops the list of best public universities in the USA is The University of California – Los Angeles. With a student-faculty ratio of 18:1, UCLA’s class sizes are smaller. Aside from its academics, UCLA is known for its achievements in athletics and its beautiful campus.

The university is also known to aid students in finding great careers post-graduation.

Along with one of the best public universities in the USA, University of Michigan is also recognized as a top-20 research university with some of the best graduate programs in the United States. UMich – Ann Arbor is known for its large student strength and umpteen programs, internships, and organization on the campus.

Founded by Thomas Jefferson in 1819, the University of Virginia is known for its strong & active athletics department and strong sense of student pride. The most popular majors at the university are – Liberal Arts & Sciences, General Studies & Humanities, Social Sciences, Engineering, Biological and Biomedical Sciences, Computer & Information Services, Psychology, English Language & Literature, and History.

Georgia Tech or the Georgia Institute of Technology is known for its academics & research courses. Georgia Tech has six colleges; and the highly ranked graduate schools include the College of Engineering & Scheller College of Business. The institute is active in research and conducts several government, military & industry researches.

Other than Atlanta & Savannah, Georgia Institute of technology also has its campuses in France, Ireland, Costa Rica, Singapore, & China.

University of North Carolina ranks 6th on the list of top public universities in the USA. The university is divided into several schools and colleges, with the undergraduate College of Arts & Sciences as the largest college. Graduate programs include Kenan – Flagler Business School, School of Education, School of Law, School of Medicine, Gillings School of Global Public Health, School of Social Work, Eshelman School of Pharmacy, & School of Government.

The University of Florida, one of the best public universities in the USA, is also one of the most affordable schools. The university has well-regarded graduate programs through the Herbert Wertheim College of Engineering, Warrington College of Business, Levin College of Law, and the College of Medicine. The university is also associated with retirement community Oak Hammock, where students can work, undergo internships & find mentors.

The University of California has long been associated with liberal student activism. The university is also known for having Nobel laureates among the faculty & several highly ranked programs.

Along with being one of the best universities in the USA, University of Texas is also one of the largest schools in the nation. The university automatically accepts the top seven percent of Texas high school graduates, and almost 90% of their students are Texas residents. Also, University of Texas offers hundreds of study abroad programs with the most popular destinations being Spain, Italy, United Kingdom, France, & China.

Founded in the year 1693, William & Mary institute is the second oldest college in the US. The university offers more than 30 undergraduate programs and 10 graduate and professional degree programs.

Like several other universities on this list, William and Mary is also considered as a “Public Ivy”, as it attracts high-achieving students, top faculty and educational experience like any Ivy League College.

Want to learn more about the best public universities in the USA, their eligibility criteria, documentation required and more, connect with our counsellors today.

10 Popular Scholarships for Indian Students to Study in the UK